The responsibility of supervising the policy pursued by the Managing Board includes evaluating the way the Managing Board implements DSM's strategy for long-term value creation, and promotes a culture aimed at that value. Since the company's mission is to create brighter lives for people today and generations to come, long-term value creation is embedded both in DSM's Strategy 2018: Driving Profitable Growth and in the company culture. This is described in the chapters Strategy 2018, People and Corporate governance and risk management.

Composition of the Supervisory Board

The composition of the DSM Supervisory Board is diverse in gender, nationality, background, knowledge and experience. There are five men and three women. Three members are Dutch, two American, one Dutch-American, one British and one Singaporean. The Board's current members are Rob Routs (Chairman), Tom de Swaan (Vice Chair), Victoria Haynes, Eileen Kennedy, Pauline van der Meer Mohr, Frits van Paasschen, Pradeep Pant and John Ramsay. For detailed information on their backgrounds, see 'Corporate Governance' on the company website and Supervisory Board and Managing Board Royal DSM of this Report.

The Supervisory Board furthermore regularly receives information on relevant topics from senior leaders and experts within DSM during committee meetings, full Supervisory Board meetings, annual site visits and as part of their ongoing professional education. In 2017, this was the case with respect to the revision of the Dutch Corporate Governance Code, the Clean Cow and Green Ocean projects, the achievement of DSM's Group Sourcing function, the progress of the POET-DSM joint venture, talent development, and IT and cyber security. During its annual site visit, the Supervisory Board actively takes the opportunity to interact with employees at different levels within the company, from the shop floor to senior leadership, thus collecting valuable information and insights from various sources within DSM.

2 The Chair has a standing invitation and has attended 100% of the meetings.

3 Victoria Haynes had to miss the additional, seventh Supervisory Board meeting which was planned in the course of 2017 following the decision to bring forward the regular strategy review process. That meeting conflicted with a prior commitment of Victoria Haynes. Due to very bad weather circumstances Eileen Kennedy could not travel nor dial in to one of the Supervisory Board meetings.

The Supervisory Board performs its duties of supervising and advising the Managing Board with respect to both recurring standard agenda items for Supervisory Board meetings and to specific topics that become relevant at a given point in time.

In 2017, the Supervisory Board was actively involved in DSM's strategy review process including the assessment as to the extent DSM is on track with the execution of Strategy 2018. Working sessions were held to identify relevant trends, risks and opportunities as input for the strategy review process. DSM's approach to the opportunities and threats presented by the 'digital revolution' as expressed in the Digital Strategy were reviewed together with the 'digital aiming points' that set out measurable goals to be achieved through the application of digital technologies in the coming years. 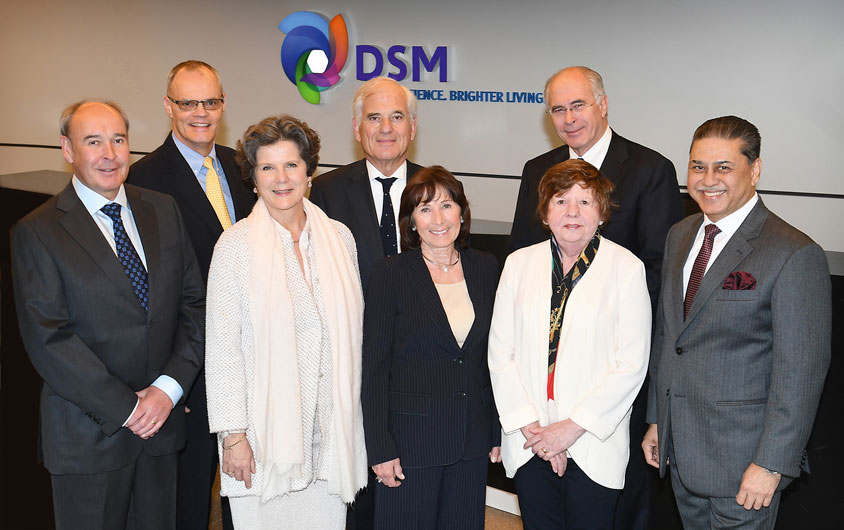 Whereas in 2016 the site visit was designed in such a way that the Supervisory Board followed the manufacturing chain of DSM Nutritional Products in Switzerland, the site visit of 2017 gave an overview of a wide range of different businesses and activities in North America. The visit to North America deepened the Board's understanding of several of the company's smaller businesses, such as i-Health and DSM Biomedical, offering additional insights into their business models, growth potential and innovation opportunities.

The North America visit began with a general overview of DSM's business in the region as well as relevant political and economic developments. The Board then received an update on Venturing, a small team operating as part of DSM's Innovation Center in North America. DSM Venturing takes minority investments in start-ups, creating opportunities for DSM's businesses.

The Supervisory Board were briefed in-depth on two specific business models within DSM — the i-Health business and the DSM-Niaga joint venture. Given the importance of customer-centricity, the briefing on DSM-Niaga was combined with a presentation by and discussion with representatives of Mohawk, the second-largest flooring maker in the US. Under the brand name Air.o™, Mohawk sells recyclable carpets made from DSM-Niaga material.

During the North America visit, the Supervisory Board traveled to two facilities. The first was DSM's Biomedical facility in Exton (Pennsylvania, USA). The visit to Exton provided insights into the technologies applied and the innovation opportunities of DSM Biomedical, the largest of the company's three Emerging Business Areas. The second visit was to the Advanced Biofuels facility of the POET-DSM joint venture in Emmetsburg (Iowa, USA). This visit included interactions with employees and with DSM's North American leadership, as well as participation in a townhall meeting. The townhall meeting was broadcast live across all DSM's North American sites.

Finally, time was taken to reflect on the site visit, with the participating Executive Committee members. Supervisory Board members shared their impressions and offered specific advice pertaining to the applied business models, technologies and the talent development process.

In December, the Supervisory Board also visited the Rosalind Franklin Laboratory in Delft (Netherlands) and learned more about the biotechnology capabilities of DSM.

Supervisory Board meetings and performance evaluation

In 2017, the Supervisory Board held its six regular meetings in the presence of the Managing Board, as well as one additional meeting in the presence of the Managing Board, in order to be able to dedicate sufficient time to the strategy review process. The Supervisory Board also held four additional conference calls. These were held to assess the procedure carried out between the publication of DSM's full-year results 2016 and the publication of its 2016 financial statements; to approve the external auditor's fee for 2018; to approve the amendment of the Articles of Association to adjust the way the dividend percentage on the cumulative preference shares A is calculated; and, finally, to give a mandate for the divestment of Patheon and for the acquisition of Amyris Brasil Ltda. Information on attendance of Board and Committee meetings can be found on SB Meeting attendance.

The Supervisory Board also convenes in the absence of the Managing Board, which usually happens before each meeting.

The Supervisory Board has four committees to cover key areas in greater detail: nominations, remuneration, sustainability, and auditing. These are described in more detail below.

The Supervisory Board established that the composition of the Managing Board is diverse in nationality (with two Dutch citizens, and one member with joint Swiss, British and French citizenship), gender (two men, one woman), background, knowledge and experience, and that it provides a good foundation to support all clusters and business groups in achieving their targets and thus to contributing to the company strategy to drive profitable growth. For detailed background information on all Managing Board members, see the company website under 'Corporate Governance' and Managing Board.

Discussions were focused on the performance and the related remuneration of the members of the Managing Board, in respect of both company and individual performance in 2017, as well as concerning the way the current remuneration policy should be applied, given the targets set as part of Strategy 2018: Driving Profitable Growth. The performance and remuneration of the Executive Committee members were also discussed with the Remuneration Committee. Feike Sijbesma and Peter Vrijsen were also partly involved in these discussions, and, as of October 2017, so was Judith Wiese, as part of her on-boarding. Mrs. Wiese succeeded Peter Vrijsen as of 1 January 2018.

During the year, a recurring topic was DSM's performance on its People and Planet aspirations with a focus on Brighter Living Solutions, Responsible Care and Inclusion & Diversity. Through these discussions, the Sustainability Committee followed up on the progress made with the implementation of the sustainability and safety aspirations set by the company as part of its Strategy 2018. Deep dives were made into several topics. One of them was the way DSM monitors and manages possible issues that can arise with DSM products. As an example, DSM's positioning on industrial biotechnology was discussed with the Committee. Another in-depth discussion took place on the Brighter Living Solutions, specifically, on the way this key performance indicator is impacted by new innovations entering the market and the effect of product / market mix performance fluctuations caused by changing markets and changing mainstream reference solutions. Time was also spent discussing the actions being undertaken to further future-proof DSM by reducing the company's climate impact and climate risk exposure, by enabling a low-carbon economy, and by advocating action externally and internally.

Furthermore, the Committee was updated on DSM's performance in the various Environmental, Social and Governance indices such as CDP, Sustainalytics, Fortune's 'Change the World' list and the Dow Jones Sustainability World Index.

The activities of the Supervisory Board in the area of financials and auditing are prepared by the Audit Committee. The Audit Committee met five times in 2017, of which three times via conference call. Tom de Swaan (Chairman), Victoria Haynes, Pierre Hochuli until the 2017 Annual General Meeting, Pradeep Pant, and, both as of the 2017 Annual General Meeting, John Ramsay and Frits van Paasschen are members of the Audit Committee. All Supervisory Board members have a standing invitation to attend Audit Committee meetings; in 2017, they used this standing invitation for the regular conference calls in which the financial developments and interim results for the first and third quarter were discussed, as these are not followed by a full Board meeting. The Chairman of the Supervisory Board participated in all meetings and calls. Whenever relevant, managers responsible for corporate control, internal audit, risk management and compliance were invited to explain developments in their areas to the Audit Committee.

The Committee had in-depth discussions on the company's financials; the financing and guarantee plan; the capital expenditure plan; dividend proposals; the financial statements; accounting policy changes; internal risk management and control systems; potential risks (including Safety, Health and Environment (SHE) and security risks); compliance with recommendations and observations made by internal and external auditors, and on the role and functioning of COA, including the endorsement of its proposed audit plan for 2018, which was subsequently approved by the full Board. As part of the Corporate Risk Assessment, the company's main risks and their mitigation were discussed. The Committee also discussed and evaluated cases submitted under DSM's whistleblower policy (DSM Alert), fraud cases, and on-going litigation. All these discussions included mitigating actions to prevent recurrence. Discussions were held with KPMG about the management letter, the audit report and the financial statements for 2017. In 2017, the Audit Committee formally evaluated the external auditor, and discussed the reappointment of KPMG. Other specific topics addressed during the Audit Committee meetings in 2017 were cyber security, DSM's foreign exchange risk management, and the foundation for the broadened in-control statement included on Statements of the Managing Board of this Report.