To: the Annual General Meeting of Shareholders and the Supervisory Board of Koninklijke DSM N.V.

What we have audited

Basis for our opinion

We conducted our audit in accordance with Dutch law, including the Dutch Standards on Auditing. Our responsibilities under those standards are further described in the 'Our responsibilities for the audit of the financial statements' section of our report.

We are independent of Royal DSM in accordance with the EU Regulation on specific requirements regarding statutory audits of public-interest entities, the Wet toezicht accountantsorganisaties (Wta, Audit firms supervision act), the Verordening inzake de onafhankelijkheid van accountants bij assurance-opdrachten (ViO, Code of Ethics for Professional Accountants, a regulation with respect to independence) and other relevant independence regulations in the Netherlands. Furthermore, we have complied with the Verordening gedrags- en beroepsregels accountants (VGBA, Dutch Code of Ethics).

We believe the audit evidence we have obtained is sufficient and appropriate to provide a basis for our opinion. 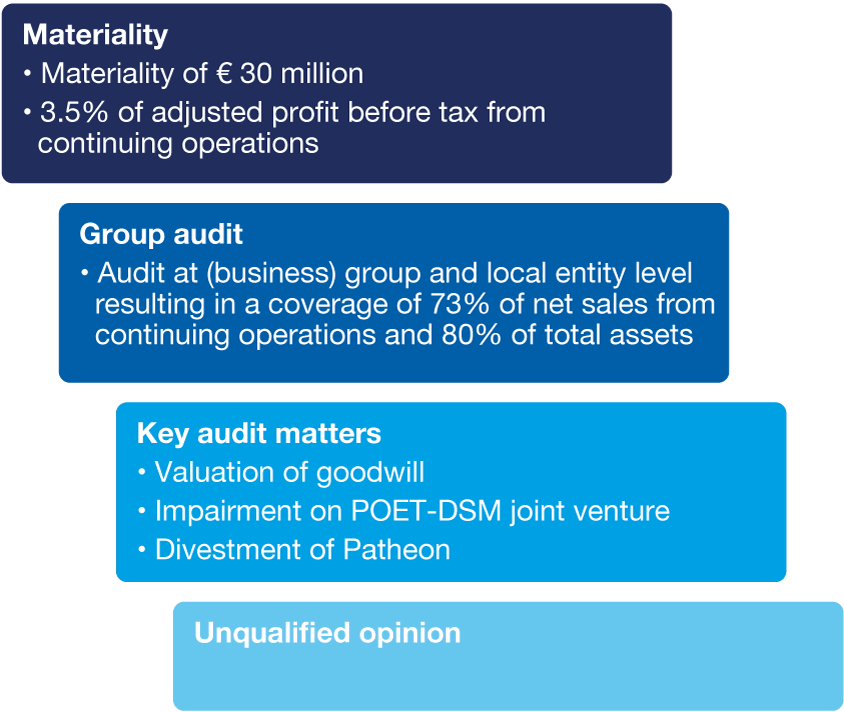 Based on our professional judgment we determined the materiality for the financial statements as a whole at €30 million (2016: €30 million). The materiality is determined with reference to adjusted profit before tax from continuing operations (Note 2: €853 million; 2016: €609 million) of which it represents 3.5% (2016: 4.9%). In addition, the appropriateness of the materiality was assessed by comparing the amount to consolidated net sales from continuing operations of which it represents 0.3% (2016: 0.4%). We have also taken into account misstatements and/or possible misstatements that in our opinion are material for qualitative reasons for the users of the financial statements.

We agreed with the Supervisory Board that misstatements in excess of €1 million (2016: €1 million), which are identified during the audit, are reported to them, as well as smaller misstatements that in our view must be reported on qualitative grounds.

Scope of the group audit

Royal DSM is head of a group of reporting entities (hereafter: entities). The financial information of this group is included in the consolidated financial statements of Royal DSM.

Because we are ultimately responsible for the auditor's report, we are also responsible for directing, supervising and performing the group audit. In this respect we have determined the nature and extent of the audit procedures to be carried out for entities reporting for group audit purposes. Decisive were the size and/or the risk profile of the entities or operations. On this basis, we selected 25 entities (2016: 27 entities) to perform audits for group reporting purposes on a complete set of financial information as well as 17 entities (2016: 14 entities) to perform specified audit procedures for group reporting purposes on specific items of financial information.

For these remaining entities, we performed amongst others analytical procedures at (business) group level to validate our assessment that there are no significant risks of material misstatement within these entities.

Our procedures as described above can be summarized as follows: 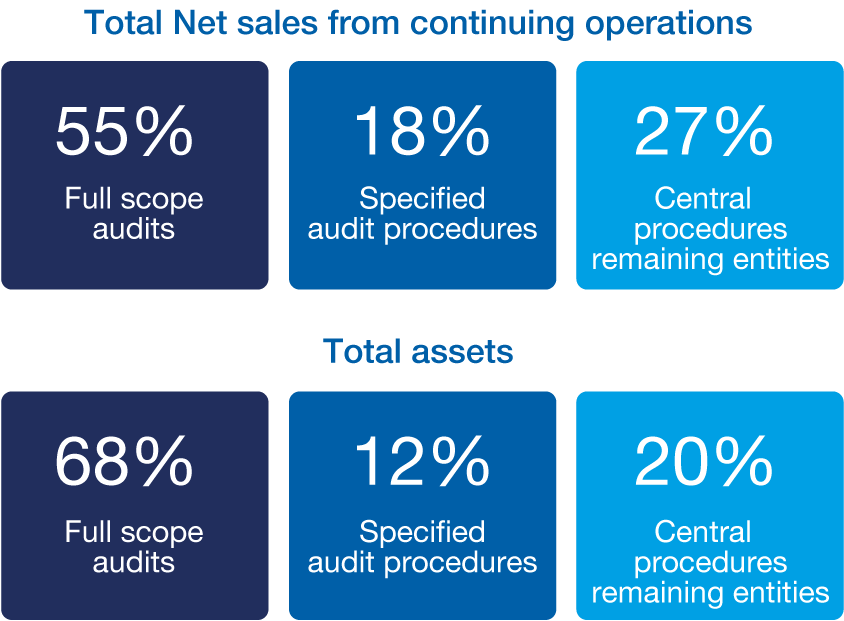 The group audit team provided detailed instructions to all business group and local entity auditors part of the group audit, covering the significant audit areas, including the relevant risks of material misstatement, and the information required to be reported back to the group audit team. The group audit team visited entity locations in the United States of America, Switzerland, China, Singapore and the shared service center in India.

By performing the procedures mentioned above at reporting entities, together with additional procedures at (business) group level, we have been able to obtain sufficient and appropriate audit evidence about the group's financial information to provide an opinion about the financial statements.

These matters were addressed in the context of our audit of the financial statements as a whole and in forming our opinion thereon, and we do not provide a separate opinion on these matters.

Compared to last year we have added as a key audit matter the divestment of Royal DSM's investment in Patheon N.V. as the accounting for this transaction is significant for the financial statements. Last year's key audit matters about the valuation of deferred tax assets and the Alternative performance measures are not included anymore in 2017 given the decreased risk profile of valuation of deferred tax assets and the lower prominence given to Alternative performance measures in the financial statements.

Royal DSM carries a significant amount of goodwill in the balance sheet. Under EU-IFRS, the company is required to test the amount of goodwill for impairment at least annually. The impairment tests were significant to our audit due to the complexity of the assessment process and judgments and assumptions involved which are affected by expected future market and economic developments.

We challenged the cash flow projections included in the annual goodwill impairment tests. Our audit procedures included, amongst others, the involvement of a valuation specialist to assist us in evaluating the assumptions, in particular the terminal growth and pre-tax discount rates, and the valuation methodology used by Royal DSM. We furthermore assessed the appropriateness of other data used by comparing them to external and historical data, such as external market growth expectations and by analyzing sensitivities in Royal DSM's valuation model. We specifically focused on the sensitivity in the available headroom for the cash generating units, evaluating whether a reasonably possible change in assumptions could cause the carrying amount to exceed its recoverable amount and assessed the historical accuracy of management's estimates. We assessed the adequacy of the disclosure (Note 8) to the financial statements.

We consider management's key assumptions and estimates to be within the acceptable range and we assessed the disclosure (Note 8) to the financial statements as being proportionate.

Royal DSM has a 50% investment in POET-DSM Advanced Biofuels which is classified as joint venture in accordance with IFRS 11 and accounted for using the equity method. The POET-DSM Advanced Biofuels joint venture continued to experience delays in the start-up of the factory which management assessed as an indicator for impairment. In the third quarter of 2017 an impairment test was performed by management.
This impairment test was significant to our audit as this test required significant management judgment in determining the expected cash flows to calculate the recoverable amount. Changes for example in projected sales volumes, related variable costs and the anticipated market price for bio-ethanol may impact the future cash flow projections. The impairment test resulted in the recognition of an impairment of €65 million.

In our audit we assessed and tested the assumptions, methodologies, the pre-tax weighted average cost of capital and other data used, for example by comparing them to external data. Key assumptions tested by us include expectations of revenue growth, margin improvements as a result of anticipated improvements in the factory and developments of the market price for bio-ethanol. We included in our team valuation specialists to assist us with these procedures. Furthermore we held meetings with local and corporate management involved in the investment POET-DSM. We assessed the adequacy of the disclosure in Note 10 to the financial statements.

We consider management's key assumptions and estimates, that resulted in the recognition of an impairment, to be within the acceptable range and we assessed the disclosure (Note 10) to the financial statements as being proportionate.

On 29 August 2017 Royal DSM completed the sale of its investment in Patheon N.V. This sale resulted in a gain on disposal of €1,250 million. Given the amounts involved, the accounting for this transaction is significant for the financial statements.

We tested the accuracy and completeness of the reported gain upon the disposal by comparing the consideration received against the terms and conditions according to the Share Purchase Agreement (SPA), the cash receipts and by reconciling the book value of the disposed amount to the underlying accounting records. We verified whether the gain on disposal was calculated in accordance with the relevant clauses of the SPA underlying the transaction. We also evaluated the adequacy of the disclosure (Note 10) of this disposal in the financial statements.

Report on the other information included in the Integrated Annual Report

In addition to the financial statements and our auditor's report thereon, the Integrated Annual Report contains other information that consists of:

Based on the following procedures performed, we conclude that the other information:

By performing these procedures, we comply with the requirements of Part 9 of Book 2 of the Dutch Civil Code and the Dutch Standard 720. The scope of the procedures performed is substantially less than the scope of those performed in our audit of the financial statements.

Report on other legal and regulatory requirements

We were engaged by the Annual General Meeting of Shareholders as auditor of Royal DSM on 7 May 2014, as of the audit for the year 2015 and have operated as statutory auditor ever since that financial year.

We have not provided prohibited non-audit services as referred to in Article 5(1) of the EU Regulation on specific requirements regarding statutory audits of public-interest entities.

Description of the responsibilities for the financial statements

The Supervisory Board is responsible for overseeing the company's financial reporting process, among other things.

Our responsibilities for the audit of financial statements

Our objective is to plan and perform the audit engagement in a manner that allows us to obtain sufficient and appropriate audit evidence for our opinion.

Our audit has been performed with a high, but not absolute, level of assurance, which means we may not detect all material errors and fraud during our audit.

Misstatements can arise from fraud or error and are considered material if, individually or in the aggregate, they could reasonably be expected to influence the economic decisions of users taken on the basis of these financial statements. The materiality affects the nature, timing and extent of our audit procedures and the evaluation of the effect of identified misstatements on our opinion.

Appendix: Description of our responsibilities for the audit of the financial statements

We have exercised professional judgement and have maintained professional skepticism throughout the audit, in accordance with Dutch Standards on Auditing, ethical requirements and independence requirements. Our audit included among others:

We communicate with the Supervisory Board regarding, among other matters, the planned scope and timing of the audit and significant audit findings, including any significant findings in internal control that we identify during our audit. In this respect we also submit an additional report to the Audit Committee of the Supervisory Board in accordance with Article 11 of the EU Regulation on specific requirements regarding statutory audits of public-interest entities. The information included in this additional report is consistent with our audit opinion in this auditor's report.

We provide the Supervisory Board with a statement that we have complied with relevant ethical requirements regarding independence, and to communicate with them all relationships and other matters that may reasonably be thought to bear on our independence, and where applicable, related safeguards.

From the matters communicated with the Supervisory Board, we determine the key audit matters: those matters that were of most significance in the audit of the financial statements. We describe these matters in our auditor's report unless law or regulation precludes public disclosure about the matter or when, in extremely rare circumstances, not communicating the matter is in the public interest.